An analysis from risk and disaster perspective

By Dharam Uprety and Krishna Basaula

2020 remained the deadliest monsoon ever recorded in last 10 years in Nepal. The peak monsoon months from June to September are the riskiest months from the perspective of water-induced disasters as 80 percent of the country’s total annual rainfall occurs during the period. The total average rainfall recorded in 2020 monsoon is 1642.4mm which is 109 percent of the average normal of 9 percent. This means the 2020 monsoon witnessed 9 to 50 percent higher rainfall except in few places where about 10 to 20 percent less rainfall was recorded. The average normal rainfall is calculated based the rainfall data of last 30 years. According to the Department of Hydrology and Meteorology, the average annual rainfall of Nepal is about 1503.5 mmbut it varies by ecological zone. Looking into the rainfall pattern of 2020, the maximum rainfall (150%)was observed in Pokhara which is 4,500mm while normal average range of precipitation in Pokhara is 3000 mm. The total precipitation in Jumla remains below normal range which is only 75 percent. In an average, Kathmandu receive 1,000 mm of rainfall every monsoon, but this monsoon it went up to 1,200mm. 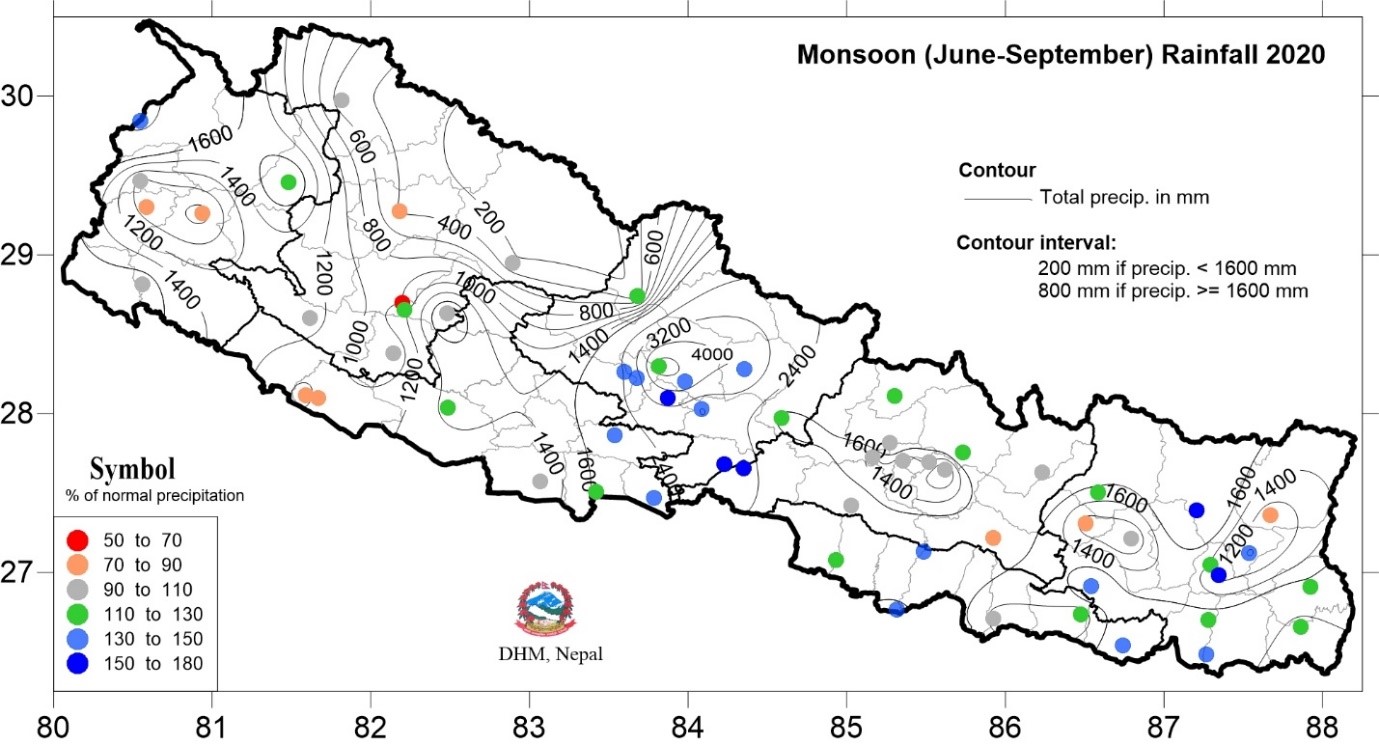 About 83 percent of mountainous region, which have weak and fragile geological structure, also lie on the tectonically active zone. Hence, when catalyzed by monsoon, widespread landslide is wreaked throughout country. Steepness of slopes in the areas where water bodies such as mountain rivers, their tributaries and stream flow swiftly contribute significantly to the landslides in Nepal. Extreme and incessant rainfall triggers massive landslides in a comparatively weak topography of the hilly region. When the debris mix with flood water, it results in massive flood in the downstream communities. Except few urban town sin Nepal’s Terai, majority of large settlements are developed overtime based on people’s mobility, proximity to India and market opportunities. But they overlook risk sensitive factors while building houses. Changes in the regular rainfall pattern, which has become severe and erratic since 2014 is also equally contributing to extreme floods and landslides events. Furthermore, illegal settlements in hazard prone areas and haphazard road construction, using bulldozers without proper engineering insights are triggering landslides in hilly areas. The practice of proper land use planning is negligible and hence hazards turn into disasters causing more lives and property loss.

Impact on lives, and property loss in 2020 monsoon

The monsoon of 2020 took a deadly shape and claimed lives of 433 people. Overall 333were confirmed dead, and 100went missing, but never returned. Of the total,358deaths are attributed to landslides, while 75 deaths are due to flood, largely due to flash flood in 2020.Being the youngest mountain range, the Himalayas are inherently unstable while being battered by heavy monsoon every year, the fragility worsens. More than 90 percent of the landslides in Nepal occur during the monsoon between June and September, peaking in July and August. Sixty-six districts have been affected by landslides and floods in the 2020 monsoon. According to National Disaster Risk Reduction and Management Authority (NDRRMA), the top three worst hit districts are Sindhupalchok with 71 dead, 38 missing and 23 injured; Kalikot with 39 dead, 6 missing, and 17 injured; Baglung with 33 dead, 17 missing and 15 injured. Because of the 2015 earthquake, the geological condition became weaker in various landscape of the district. The monsoon rain exacerbates the vulnerability to landslide. According to National Reconstruction Authority (NRA), 4,829 settlements in the 14 earthquake affected districts are at high risk of landslide, and recommended many communities for relocation, and readjustment before the community live safely.

At federal level, NDRRMA has been established as per the DRRM Act 2017. DRRM Act mandates NDRRMA as sole authority to prepare and manage various disasters. NDRRMA has been identified with 25 different roles ranging from research to resource mobilization. But it is yet to establish connections with provincial and local governments. Communication and line of management with other agencies is also unclear. It relies largely on other agencies for risk information. For example the hydro-met hazard related information with DHM, and information on loss and damage from district administration office. It doesn’t have mandate to provide guidance to local disaster risk management committees housed at local government and provincial disaster risk reduction and management council housed at all provincial governments yet. There is need to build capacity of NDRRMA in terms of human resources, and technical equipment which would help NDRRMA to be a leading agency in DRRM. Similarly, Ministry of Federal Affairs and General Administration also has its Environment and Disaster Risk Management section, that is mandated to work on DRR preparedness. Under the Ministry of Home Affairs (MoHA), National Emergency Operation Center (NEOC) is focused on emergency response while similar emergency centers are provisioned at province level district and at local level. The Provincial Emergency Operation Centers (PEOCs) in province government and Local Emergency Operation Centers (LEOCs) in local governments are in their very early stage of development and in many cases lack capacity to make them functional.

Though the Disaster Risk Reduction and Management Act 2017 clearly demarcate the roles and responsibilities of the three levels of government on how to engage in DRRM, the experiences show otherwise. The assigned roles and responsibilities are neither communicated nor executed by the governments timely and most of the time they appear concerned about rescue and relief operations. There is gap in risk knowledge among the governments and stakeholders to plan and invest on preparedness to prevent loss of lives, properties and livelihoods; and coordinated actions on disaster risk reduction and humanitarian response among humanitarian actors and governments agencies for effective and timely delivery of services.

The DHM issue a bulletin, press statement stating the degree of precipitation in different parts of the country. The Flood EWS is seemed much effective as it is linked with community institutions at the same time with DHM radar system. Regarding the flood risk information and early warning there is no mechanism to ensure that people receive, understand and response to the warning alert. There is need of immediate actions to improve the current flood forecast and early warning communication by tailoring the available flood forecasts and make them actionable with increased access to end users.

The landslide early warning system is yet to advance and prove reliable. More research and development should be focused towards developing linkages in the area of landslide. There is issue of DRR mainstreaming and integration into sectoral plan and development programmes. Humanitarian response is not linked with development. There is issue of investment on preparedness and risk reduction measures. Yet the focus is on emergency response which is not linked with preparedness and resilience. Risk transfer mechanism is another issue of DRR which needs to be addressed and institutionalized. Government is yet to introduce a national early warning system policy with which aimed to systematically address issues linked with different stage of DRRM and reduce lose and damages.

Original link can be found here.