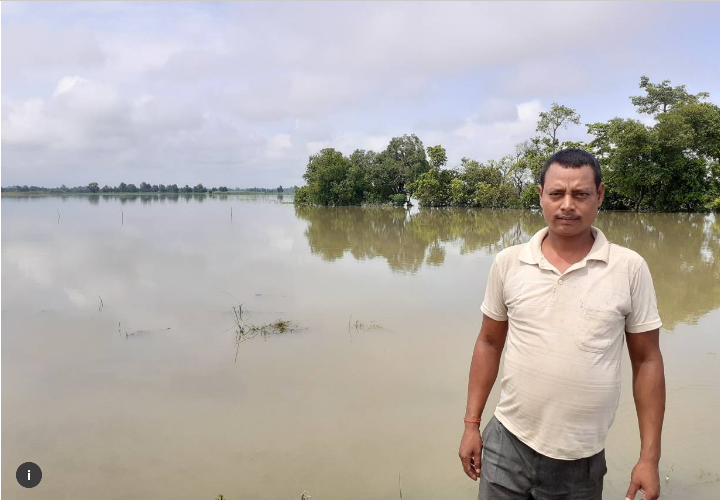 Before the coronavirus pandemic hit, Nepali farmer Ganga Bahadur Sahi would go to India for six months a year to work as a labourer, earning money to feed his family of five.

This year he came back early to his home in Bhajani municipality in Nepal’s Far West region after COVID-19 started spreading rapidly in India. But his problems didn’t end there.

“Now this flood has devastated my crop fields,” said the 45-year-old, who is staying with a relative after his house and paddy field were inundated.

“If this continues, the leaves will turn yellow and the roots will start decaying,” added Sahi in an interview conducted remotely for the Thomson Reuters Foundation, pointing to his rice plants.

“I also need to renovate my house after this water level drops down, but I don’t have enough money to do that,” he said.

With grim harvest prospects and his job in India gone, Sahi worries whether he will be able to provide food for his family and continue paying for the education of his two sons.

“Sadly, I don’t have any options other than agriculture as I am not able to afford a loan from the bank during this challenging time,” he added.

On Thursday, the Red Cross said almost 17.5 million people had been affected and more than 630 killed by major floods and landslides in India, Bangladesh and Nepal so far this monsoon season, including almost 200 dead or missing in Nepal.

The flooding puts many vulnerable people at growing risk of malaria, dengue and diarrhoea, the international humanitarian agency warned, while treating such diseases could be complicated by South Asia’s worsening COVID-19 pandemic.

According to NASA’s Earth Observatory, the low-pressure systems of Asia’s summer monsoon have been especially strong and stationary this year, allowing them to draw even more moisture from the Indian and Pacific oceans and deliver it to land.

In Bhajani municipality, Raja Ram Chaudhary, another local farmer, usually heads to India to buy food if the harvest is not enough for his family – but said that is no longer possible.

“All my crops are at risk of damage and I cannot even go to India if I face food shortages as the borders are closed due to the pandemic,” said Chaudhary, who is staying in a tent erected on the postal highway, where many displaced families are living.

“I have never seen such a huge flood around this area,” he added.

Bikram Chaudhary, chairperson of one of Bhajani’s worst-hit wards who is not related to Raja, said the flooding had been caused by heavy rains swelling four major rivers.

“We were already struggling with one big problem (coronavirus) and then this disaster struck us,” he said.

According to district data, there have been about 50 cases of COVID-19 in Bhajani, which has a population of nearly 60,000.

The flooding has killed at least three people in Kailali district, where Bhajani is located, destroyed or damaged more than 4,700 homes and displaced more than 2,600 families.

Chaudhary noted it was almost impossible to maintain social distancing and take precautions to avoid the spread of infection while rescuing and lodging people made homeless by floods.

They are forced to stay in close proximity in the small number of shelters available or at roadside camps.

Almost 75% of rice fields in Bhajani were flooded and manure compost needed for the winter crops was swept away, which could dent yields, said ward chairman Chaudhary.

Pests like armyworm are meanwhile destroying other staple crops like maize, though farmers here plant less maize than in other areas, he said.

“Many people are now unemployed and with crops in the field devastated by floods, we are sure to face food shortages and hunger soon,” he warned.

To provide employment for returned migrants, the municipality is planning to use manual labour instead of machinery for some public works like road-building, he noted.

Funds have also been allocated to provide training and subsidies for farmers to grow spring-season rice which could help make up for current losses to flooding, he added.

Dharam Uprety, South Asia climate lead for international development charity Practical Action, which works to reduce disaster risk across Nepal including in Kailali, said floods of this magnitude had not been seen there for more than 40 years.

Moreover, the response had been hampered by “psychological terror in the rescue team caused by coronavirus and inability to take precautionary measures due to limited resources”, he said.

Early warning systems installed in river basins by the government and aid partners had reduced loss of life by alerting people four to six hours in advance of the floods, he added.

“However this technology cannot help significantly to reduce loss of field crops and property,” he said, although some people were able to take stored grain and valuables to a safer place.

To protect communities better in future weather disasters, it was important to expand crop insurance and help people find new ways to make a living, he said.

For instance, they could focus on growing high-value crops like jute, which can be woven into a sturdy cloth.

“Migrant workers who are largely unemployed should be provided resources and technology to be engaged in … cash-oriented agriculture rather than the subsistence agriculture widely prevalent in Nepal,” he said.

Original link can be found here.